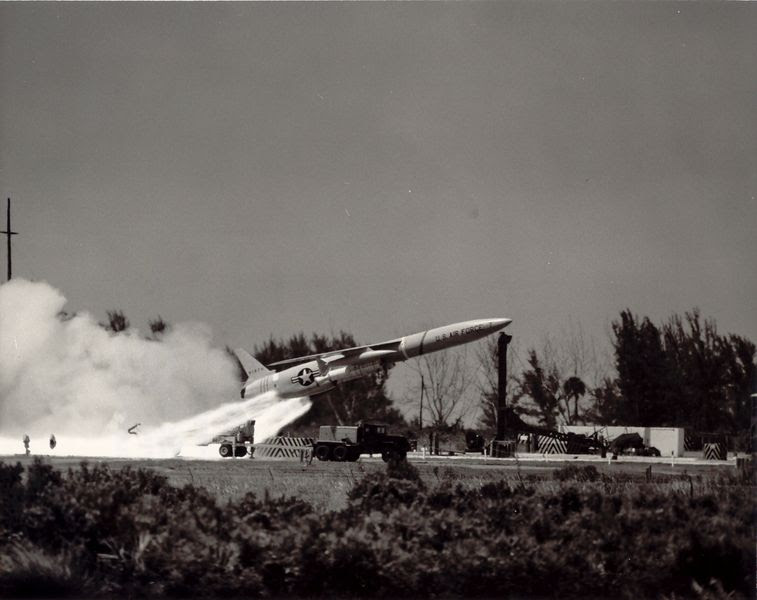 The Northrop SM-62 Snark was a specialized intercontinental cruise missile with a nuclear warhead briefly operated by the US Strategic Air Command from 1958 until 1961. It takes its name from Lewis Carroll's snark, a very ambitious fictional monster with very little sense of humor.

The Snark was developed to offer a nuclear threat to the Soviet Union at a time when ICBMs were still in development. Work on the project had begun in 1946. Initially there were two missiles - a subsonic design (the MX775A Snark) and a supersonic design (the MX775B Boojum). Budget reductions threatened the project in its first year but the personal intervention of Jack Northrop and Carl Spaatz saved the project. Despite this funding was low and the program was dogged by requirement changes. The expected due date of 1953 passed with the design still in testing and SAC was becoming less enthusiastic. In 1955, Eisenhower ordered top priority to the ICBM and associated missile programs.

Despite considerable difficulties with the missile and military reservations toward it, work continued. In 1957 tests the missile had an average CEP of 17 nautical miles (31.5 km) and the most accurate test of 1958 fell 4 nautical miles (7.4 km) short. The design was also notoriously unreliable with the majority of test missiles suffering mechanical failure thousands of miles before reaching the target area. The reduced operating altitude, from 150,000 to 55,000 ft (46 to 17 km), and the inability of the missile to undertake evasive manoeuvres were also cited against it.

The Snark was an air-breathing design, launched from a light platform by two rocket booster engines. It would switch to an internal jet engine for the remainder of its flight. The jet was a Pratt and Whitney J57, the first 10,000 lbf (44 kN) thrust design, also used in the early B-52 and the F-100. Lacking a horizontal tail, the missile used elevons as its primary flight control surfaces, and flew an unusual nose high aspect during level flight. During the final phase of flight the nuclear warhead would detach and follow a ballistic trajectory to the target. The missile itself would become unflyable and crash as soon as the warhead detached.

One of the more advanced features of the Snark was its ability to fly missions of up to 11 hours and return for a landing. If the Snark did not detach its warhead, the missile itself could be flown repeatedly. Lacking landing gear, it was necessary for the Snark to skid to a landing on a flat, level surface.

The Snark, A Magnificent Failure: "Jackpot. This video should *prove* nothing, but it speaks volumes. It yells." --amaraca (comment on YouTube)