How Many Laureates Can Dance On The Head Of A Pinsky? (Monday Love) 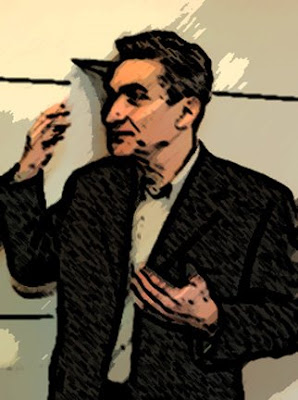 How many laureates can dance on the head of a Pinsky?

Modernists have blocked up the Hall.

Search every Engle, try every Bell, there's no Justice at Iowa.

And what Haas Stanford got? The Winters of our discontent.

The Brooks (Cleanth and Van) are frozen, the public's deserted,

Yet the blurbs go Trilling on, the Criterion's applied to a Dial in the costume of an Egoist.

Cubism at the court of James. Who's Kenner's son?

Raise your Stein to Whitman's mothers and Ruskin's stones.

Make it new, critics! College for poets, poets for college.

The Southern sublime at Vanderbilt.

Sir Bishop Lowell reminds you, Williams, not Will. The rest is Donne.

How many rabbits in the Warren? Shine, golden dawn.

Shun the Rhooshuns, frigidly pretend authority in a Romance tongue.

You're in my Faber. The ode to Auden damns the Berry to Ash.

Where shall I put these poems, now? The Bloom's off the Rosenthal.

Ezra Pound is a douchebag.

28. Allen Tate, poet, Southern Agrarian, and New Critic who attacked professors of literary history, softening up the Academy for its eventual take-over, Jorie Graham, Foet, 'the Rhooshuns' was a term Pound used in his rant, "How To Read," to dismiss all Russian literature; Pound would later broadcast for the Axis powers in World War Two, Faber was Eliot's publisher,