After the infamous 2006 Oprah grilling of faux memoirist James Frey, The Snarkster posted this comment on Writer's Weekly, a writing forum:

Alas, TS had to endure some friendly ribbing from other members. Being fairly thick-skinned, TS, instead of sulking, wrote a poem about James Frey's poor beleaguered Juggler. 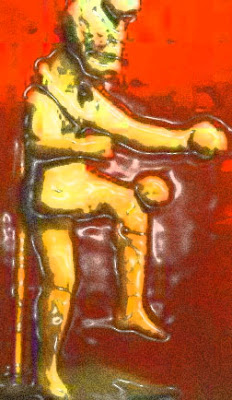 James Frey’s
joggled juggler
flees from a mob
of cuckolded clubbers–
cartwheels
through WritersWeekly dot com,
rehabbing his much-wanted jugular.
A performer too poorly paid
to finagle any longer,
he cooks up
his own memoir:
Mr. Frey’s Trickster
and One Million Manipulated Characters
Who Tumbled to Spill All--
Not.
Oprah,
back on her lexicon diet,
devours Crispy Nan,
fried Freys–sucks
juggler jugular
blood.

These guys appeared on the 2006 edition of America's Got Talent.