If Maverick-y Sarah Palin Were a Democrat... 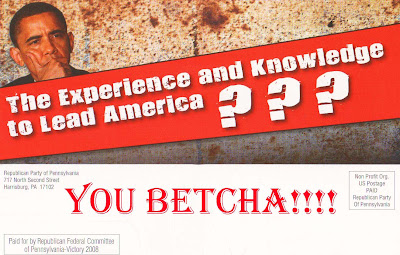 Earlier today, a charming piece of RNC propaganda arrived at The Snarkster's abode, so she thought it might be fun to do a little mischief on it and play around with the reverse message to create a political cleave poem--in Obama's favor, of course.

You Betcha!!! So let's cleave for Barack Obama!!!

If Obama were in the Army, you'd call him --
A FIVE-STAR GENERAL

If he were an athlete, you'd call him --
A GOLD MEDALIST

If he were a plumber, you'd call him --
A MUCH IN-DEMAND MASTER PROFESSIONAL

Sarah Palin explains her qualifications to be VP through the power of breakbeat.