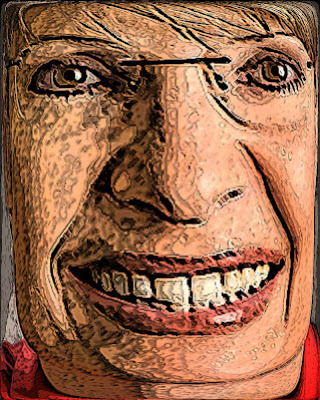 I used to have this “spin” on 1984—
A kind of Orwellian dystopian disposition
Toward a nightmare society in the Future…
High school was bad & college worse—
The Viet Nam War stunk and office politics
Made life a miserable mean Baboon Pit…
I knew I’d be a louche lazy husband—
And a down and out no-good deadbeat dad
So I skipped all the domestic “bliss” routine…
Nineteen Eighty-Four always seemed—
Sort of just around the corner hiding behind
Some kind of tricky-dick Nixonian subterfuge...
I used to think Big Brother was Fiction—
Even thou my day to day life was crowded
With lots of dumb Animal Farm Porky Pigs…
But now it’s OOOOOOHHHH BARACUDA—
Big Bad-Ass Bodokandonkas Sarah’s Show!!!
Watch out! Big Sister’s “preying” for me!!!