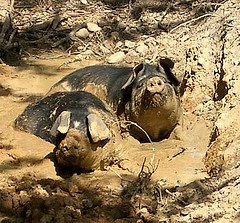 Now the Chipmunk courts the Moose,

If Lady Viper becomes the master,

The Bridge to Nowhere a dire disaster?


The Trojan Moose conceals her weapons

If any or all of these blunders

We should not consider them wonders;

The Bridge to Nowhere (Video uploaded to YouTube in August 2006)

After visiting 27 states and dozens of pork-barrel earmarks from Vermont to San Diego and Florida to Wyoming, the Ending Earmarks Express has now visted the granddaddy of all pork-barrel earmarks... the infamous Bridge to Nowhere in Ketchikan, Alaska. As you'll see in the accompanying video we shot on the ferry between Ketchikan and tiny Gravina Island in a remote section of southeastern Alaska, there's really no need to spend $223 million federal taxpayer dollars on a bridge longer than the Golden Gate and taller than the Brooklyn Bridge.

"Did Sarah Palin wrongfully push to have her ex-brother-in law fired? Was she really against the "Bridge to Nowhere?" Did she really sell Alaska's plane on eBay, or just list it on eBay? Did she actually have any substantial duties commanding the Alaska National Guard?

The correct answer to all these questions is: who cares? Which isn't to say these aren't valid questions, or that Palin and the McCain camp aren't playing it fast, loose, and coy with each of them. The point is that Palin, and the circus she's brought to town, are simply a bountiful collection of small lies deliberately designed to distract the country from one big truth: the havoc that George Bush and the Republican Party have wrought, and that John McCain is committed to continuing.

Read the rest of this article.

(Thanks to Diana Manister for the Huffington Post and Polar Bear news clips and the inspiration for this post and poem.)
*
Posted by Jennifer at 7:16 PM